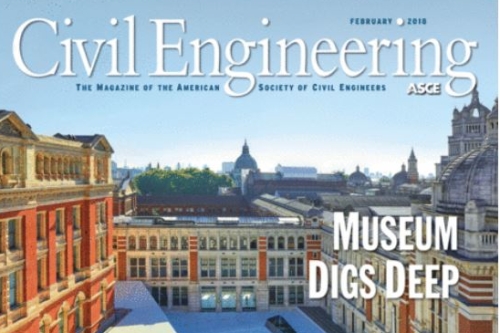 Kenichi Soga, Chancellor’s Professor in CEE, and the Centre for Smart Infrastructure and Construction (CSIC) at Cambridge University placed fiber-optic cables that will serve as permanent sensors on the underground structure built at London’s Victoria and Albert Museum (V&A).

By taking regular readings from the cables, the researchers will have a case study that will help validate the nonlinear elastoplastic finite element analysis that was used as a predictive tool on the project.

“An access hatch has been built into the underground structure so that the team can set up its computers and take readings anytime. The analyzer—the machine that performs the readings—performs by shooting a light along the cable to detect strain and temperature every 5 cm along its entire length, up to a few kilometers,” says Soga.

While an off the shelf analyzer was used for initial V&A monitoring, the team from CSIC and Berkeley is creating its own version to push the boundaries of the monitoring system so that it is more robust and can be used for long-term monitoring.

Soga, formerly a professor of civil engineering at Cambridge University, and his team have spent the last ten years developing and refining the distributed fiber-optic sensing system that is being utilized to monitor the site.

The project was featured in the February 2018 issue of the ASCE Civil Engineering magazine.